Reposted FaceBook note from April 22nd, 2013. All images in this post created by Jon Neill. Except the last one. I don't care for who created the last one.

In honor of Earth Day, and since the confidentiality clause in the written agreement has expired, I will now present a short description of a cartoon I helped co-develop back in 2008 called "The Green Glo Girlz".  What first was planned to be a video game about an alien invasion changed gears into an animated series that was meant to promote "the green lifestyle", although the idea of turning it into an animated film was toyed with as well.

The premise was that an evil group of toxic villains, gathered from various planets across the universe, came to Earth to pollute, corrupt, and eventually take it over.  Our saviors were The Green Glo Girlz, women from a Utopian planet called Unebula who would foil the bad guys' plans while promoting environmentally friendly and healthy living.  The characters were:

The Green Glo Girlz
Gala- The level-headed leader.
Gisela- The hot-headed weapons expert.
Ulla- The knowledge hungry scientist.
Karina- The highly competitive pilot of the Girls' vehicles.
Nia- The combative muscle who served on Unebula's police force.
Aingeal- The inventor and mechanic.
Kimiyo- The vegetable growing, pacifist ninja.
Jalila- The nature loving mystic who is at tune with the Unebulan's dormant alien powers. 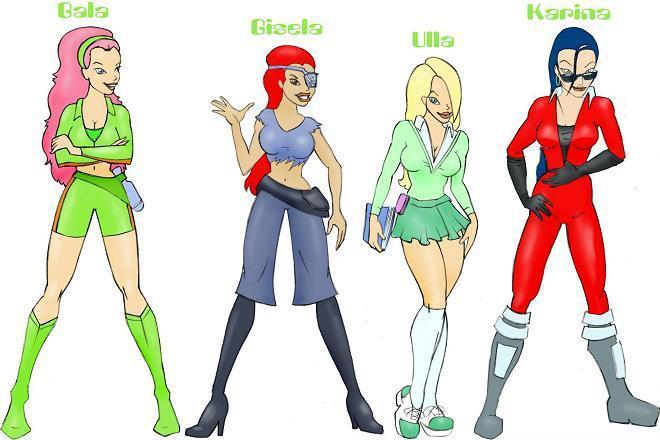 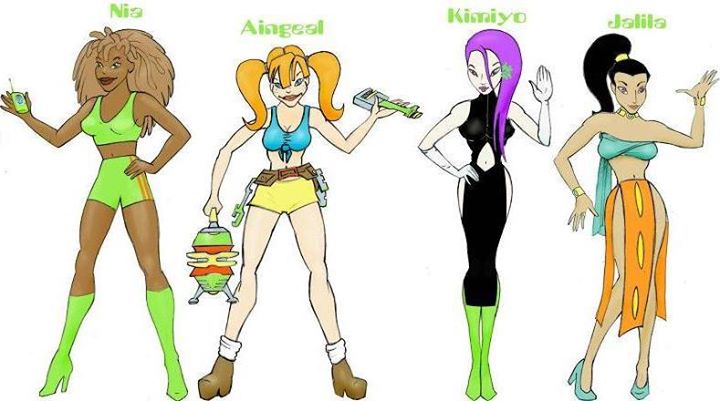 After being given guidelines of what my boss was looking for in the project, I wrote the story, designed the characters, ideas for alien gadgetry, and the summaries for ten episodes of the first season.  We had a professional artist on hand that took my character descriptions and created amazing artwork based on them that stayed very close to my ideas.  The President of the company showed off our project to various entertainment conglomerates in and around Hollywood, including Disney and Warner Brothers, and it even ended up on the desk of Stan Lee at the end.  While they all reacted positively to the concept, they weren't interested in taking it on.

We eventually discovered a company who agreed to help develop the project and shop it around to television networks to air it.  First, they completely redesigned EVERYTHING until nothing was recognizable from my original work, which resulted in a gang of soulless abominations called "The Naturals".

They also failed to live up to the agreements they made with us in finding network support, and our relationship came to an end.  Shortly after, The Green Glo Girlz project was shelved.

In the end I learned a lot about the behind the scenes in Hollywood, made some money, and had a lot of fun in this little venture and was sad to see that the Girlz didn't make it.  I had a lot of myself in this project, and it was cool to know some major studio execs had at least a good reaction to it.  But I do have a pretty good feeling I'm far from done in Hollywood.
Scrawled by James Gannon No comments:

A Life Lesson From The Giant Puma

An important lesson a friend taught me with his passing.

There are many people I met in the United States Wrestling Federation that I've never called by their given names. Victor J. Cavalera, X-treme, Brando Spade, The Lariat, and Ryan Starr to name a few. The Giant Puma is one of them, and I'm sure he's preferred it that way. I didn't even know what his actual name was until we became friends on Facebook.
Puma was 34-years-old at the time of his passing, the same age range as most of the USWF crew. I'm 33 at the time of this writing. We all assume that we'll live at least into our 70's, if we're lucky. But life is an unpredictable thing, and no greater evidence of that is when one so close to us dies without warning at a young age. As if taking great care to live a safe and long-lasting life weren't hard enough, there are outside forces beyond our control that could either greatly inhibit our health or eliminate us altogether.
Puma created a wonderful family and amassed a collection of the best friends anyone could ask for, and he clearly loved life and made the most of it. How many of us can say we're completely happy with our position in the world? And if we are, is there any way we can make it better? I don't like where I am right now. I know I'm capable of much more than what I've done so far. I've squandered my youth with procrastination and complacency. Do I have enough time to make a definitive mark on the world?
The Giant Puma may have passed, but he'll live forever in the memories and stories of all who knew him. Let his life serve as both a guideline and a warning. Enjoy as much of it as you can and as soon as you can. Because you just never know when it might

The Legends of Gannon

I've decided to set forth on an epic adventure, following in the footsteps of the Hero of Time himself, the Hylian known simply as Link.  One of Nintendo's top gaming icons and likely rivaling Mario in popularity, Link has slashed his way through every console the Big N has put out; each of his outings considered among the best of each generation.  Like most game series that get it right the first time, the tales of Link have many recurring elements, but are varied enough to be unique entries in the mythos.  Chief among them are the hero himself rushing to save his homeland of Hyrule by liberating the mystical Triforce and Princess Zelda from the evil clutches of Ganondorf.  Along the way he has to traverse a vast overworld and explore dreadful dungeons in order to gain enough equipment to allow him to progress in his journey and defeat the bosses.  I've been fortunate to join the Zelda series since its original incarnation on the Nintendo Entertainment System, but I've regretfully fallen behind on several of his more recent outings.  There's even a handful I've played but never completed.  Now I'm dedicating myself to take on and conquer every single Zelda adventure in the order of their release and recording my progress here.  I won't give full reviews of each title, there's PLENTY of those on the Internet, but an overview and personal opinions of them.  What follows is a list of each game that will eventually be filled with commentary as I conquer them.  Until then, each title contains info on my experience with them, their original American release date and the console they debuted on here.