I got an e-mail late last night from The Stray Cat. I don't mean an abandoned feline whose "cat like typing" accidentally sent me a coherent FaceBook message. "The Stray Cat" is the stage name of Jay Messier, a fellow Rhode Island resident who has had a lot of crazy escapades in the Ocean State, such as hosting Yellow Snow, a public access show dedicated to his misadventures revolving around teenage girls and beer, and was once the owner of the backyard wrestling club known as the United States Wrestling Federation. Pretty much everything I just mentioned in this paragraph will have Epitaphs devoted to them, but we're going to focus on the content of the e-mail.

"That guy" is a reference to Tom Helling, who we will affectionately refer to as "The Cross Guy". Mr. Cross Guy is a man who recently found God and decided to carry a large cross over his shoulder from Bangor, Maine to Mexico to spread the powerful influence of The Almighty Father. That's about 2,900 miles. Keep in mind I walked about 10 miles through Providence to make my Confirmation and ended up with blisters the size of golf balls on my soles. This guy cares more about God now than I ever did. 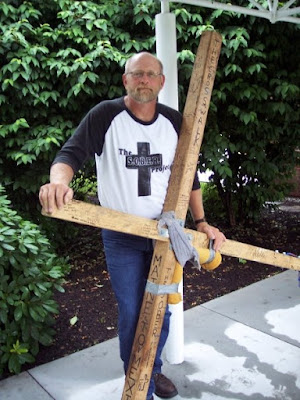 The Stray Cat was anticipating that this interview would be an adequate follow-up to his "Homeless Suzy" video, where he recorded a crazy woman's ramblings at the park where his friend's wedding photos were being taken. You would figure that a gentleman emulating Christ's excruciating, cross-dragging march towards his eventual crucifixion in the 21st century might yield a bizarre interview. Would Jay's public access standout, Yellow Snow, return to its glory years on the backs of Suzy Q. and The Cross Guy?

I predicted that this interview would secure Jason Messier's destiny as the phoenix rising from the recently deceased Walter Cronkite's ashes. That is, if the news anchor who was called "The Most Trusted Man In America" had a history of convincing women to flash at night clubs and turning himself into a literal pin cushion with thumbtacks while wrestling in his backyard. He labels himself as America's Savior, dedicating himself to fight the chains of oppression that political correctness brings. He does it by finding comedy in topics that might be considered taboo by most, as evidenced by the videos he's created. So when Jay got a hot tip on The Cross Guy and his whereabouts, he knew he had to conduct an interview with him that only The Stray Cat could. 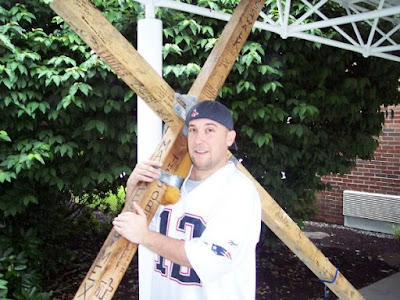 It was learned that The Cross Guy was staying at a Motel 6 in Warwick, and I have no idea how Jay did it, but he contacted the motel and managed to set up an interview with Mr. Helling for the following day. It didn't seem like Tom would be moving on from his current location for a while, as he mentioned how tired his legs were and the fact that it would be raining most of the day. But we had to get there quick. The Warwick Beacon already scooped us the day before, and I'd be damned if a larger news group beat us to the punch. Thankfully, there were no news vans in the parking lot when we arrived. We entered the Motel 6 and Mr. Helling was waiting for us in the lobby, sans cross. We were to conduct the interview in the courtyard, which was under a balcony, but that didn't really matter since the rain let up. But wouldn't you know that the lawn sprinklers just happened to start up? The Cross Guy went to his room to get his namesake first, then we were ready to roll. He sat with Stray Cat on a green metal mesh bench and I held the camera to record this historic Yellow Snow feature.

I won't spend too much time in this Epitaph transcribing what will already be found in our video footage and online articles already written and soon to be written. Links to all those will be found towards the end of this entry. I'll just address some key points. Just about every question was asked by Jay, which was fine considering many of my own were similar to what he planned on asking anyway. The one inquiry I had was basically when he started his journey and how long he expected it to last. Taking into consideration how long he could stand to walk with a mobile cross over his shoulder in a single day, plus the times he would have to shack up during inclement weather, this missionary to Mexico could be at it for years. Speaking of which, The Cross Guy said his foray towards South of the Border might not even go past that border. He might either tag it with his hand or step one foot onto Mexican soil and be done with it. Hell, he might even decide to continue his great journey indefinitely.

One thing The Cat and myself marveled about was the lack of news stories about his journey. We both searched the Internet for any info about this guy we could scrape together, and there were only a scant few articles from roaming journalists lucky enough to drive past him and chase him down for an interview. Tom did not seem perplexed, as he was not seeking attention with his journey and certainly didn't advertise it. But I have a feeling that as word of Mr. Helling spreads, many interested parties may set up camp by his estimated resting points in order to chronicle his story for their region's news organizations. It's the feel good story that's sorely missing from today's newscasts. 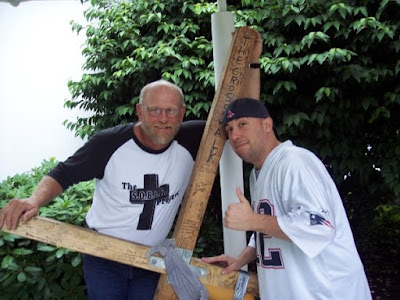 While The Stray Cat managed to conduct a good straight-forward interview, that wasn't the original intent. We thought we might try to ask some fun questions to take the edge off the serious message behind The Cross Guy's quest. The kinds of things that serious and legitimate reporters wouldn't ask. However, we changed our minds early on as we got to know the guy and asked normal questions. Sure, it wasn't the Homeless Suzy follow-up Jay was relying on, but I decided it was good for what it was and Tom had a great message for the human race. It was more about spirituality than religion, meaning you didn't have to have a superior being in your life to make the most of it. While there were questions I wish I remembered to ask when I had the chance, I spent more time thinking about questions that I shouldn't ask on the drive over to the motel.
-Did anyone ever make remarks about the seven-foot-long wood he was packing?
-Should he stick an umbrella on top of the cross to make his walks in the rain drier?
-Wasn't it totally hilarious that a man whose last name is Helling has turned to God? I can answer that. The answer is "no".
-Did he hope to inspire other people with his actions? Inspire them to also construct large crosses and carry them around the highways and byways of America? It's fine for one guy to do it, but if there were legions of people emulating this act it would slow down traffic worse than cyclists.
-Did he consider himself a modern day Jesus, demonstrating how he would lug around a crucifix in the present day? Features of this cross are a wheel on the bottom, a padded shoulder rest, minimal supplies strapped to the bottom, and new boots on his feet. Critics have already decried that the way Mr. Helling was going about his recreation "wasn't how Jesus did it", but I most certainly believe Mr. Christ would have if he were sentenced in this day and age.

We signed The Cross Guy's cross, as those who conversed with him were invited to do, which after only eight days and 3oo miles was already speckled with as many signatures as there are verses in The Bible. I wonder if all that extra ink and lead weighed his lumber down even more? By the time he completes his trek, the thing will probably be completely black from all the John Hancocks, not to mention his shoulder and hands stained from holding the cross in humid and moist weather conditions.

When we were finished with our questioning, we still tried to sneak in a little bit of clowning around with The Cross Guy. See, Jay brought a boom box along with us in hopes that we could convince Tom to either sing karaoke to Madonna's "Like A Prayer", or to get him to do a Hulk Hogan set of poses to The Hulkster's entrance music "Real American". Jay tuned up Hogan's music and demonstrated how the former wrestling icon would play to the crowd by flexing his arms in positions not that much different than how a cross would stand. While Mr. Helling got a kick out of The Stray Cat's routine, it wasn't for him. So we bid him farewell and good luck, and even though I have no control over such things, I apologized to the Arizona native for the rash of wet weather New England had been getting lately. Godspeed, Tom "Cross Guy" Helling. You're a stronger willed man than I.

I also made a little snippet of video with Jay before departing, (in my driveway, not in front of The Cross Guy) where I told COX Communications to fuck off because they forbid us to advertise the United States Wrestling Federation's online content. I also happened to be wearing my custom made USWF logo shirt during the interview. 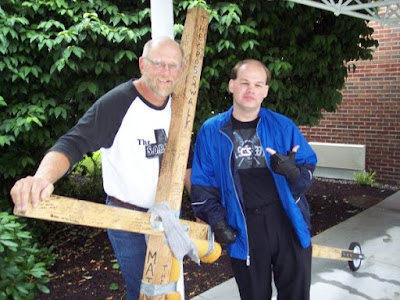 Keep in mind that since Tom Helling practically just started his journey, there will be many more articles written in the future, so hug that Google if this story interests you. I doubt I'll be posting any more follow-ups. I've written my piece.
Scrawled by James Gannon No comments: