About a decade after its initial release, I finally conquered Samus Aran's debut adventure in the Metroid franchise.

Despite owning a Nintendo Entertainment System about a year or two after it surfaced on American shores, much like Godzilla does in Japan, I had very little Metroid experience. Sure, I've had a few rounds with it because a friend of mine had a copy, but I didn't get my own cart until the NES passed the torch to its super successor. It was a cheap purchase, but didn't get much of my attention in lieu of other games. The reason I never gave it the full play through it deserved is because... well, it was too difficult.

That wasn't the only chance I was offered to delve into the planet Zebes to splatter The Mother Brain. Nintendo gave players a chance to play Metroid if they hooked Gamecube's Metroid Prime up to Game Boy Advance's Metroid Fusion. Also, another GBA release called Metroid: Zero Mission, a remake of the original, rewarded you with the NES version upon completion of the game. But I never felt the desire to go old-school with Samus until only a few days ago.

My chosen vehicle for excavating Zebes was Zero Mission. Anyone who's familiar with the franchise knows that all games beginning with Super Metroid featured an in-game map, because every mission Samus accepts takes her through an underground labyrinth. But as I said, "beginning with Super Metroid". Metroid 1 didn't offer you such a luxury, the game was one of the earliest releases of the NES era that even required you to enter a 24 character password in order to continue your progress after turning the system off. So what would you have to do in order to find your way through the vast tunnels of Zebes? Grab a pencil and paper and map it out yourself! That's not a bad thing for the most part, mapping your progress was enjoyable. However, even that couldn't save you as you continued further into the game.

Arguably the worst aspect of Metroid was its repetitiveness. When you reach the areas known as Norfair and Hideout I, you begin to experience deja vu, as well as deja vu of the deja vu you already had. That's because the corridors within each section feature the exact same layout, from the positioning of the obstacles to the enemies featured within. So while you're making a map while traversing identical locations, you start wondering if you already charted that area before, rendering your personal guide useless. But this being the 21st century, there's always the Internet and its vast resources to help you out. I cheated a bit and headed to GameFAQs to look for a more trustworthy map just to find out where the hell I was going wrong in Kraid's Hideout. I noticed I missed quite a few valuable tools during my initial journey through Norfair because there was a small piece of floor I failed to bomb that would grant me access to the nether regions of that place. So I back-tracked, collected the missing upgrades, and then straightened myself out on the path to Brinstar's boss.

Another aspect that can be perceived as a flaw at first is the high difficulty level when you first start off on your Metroid murdering mission. You get a weak little beam that's fine for taking out the crawling Zoomers and dive-bombing Rios of Brinstar, but when you advance further and meet up with the thicker-skinned residents of Norfair, such as Gerutas and Multiviolas, it's best to freeze them and continue on because they're powerful enough to weaken you with only a few attacks. And if you die, you're resurrected with only a measly 30 health units, which will only let you survive two hits from more powerful enemies. Novice players will probably forget that missiles are good for offense as well as opening a few red doors, so they'll probably want to conserve them. But let me tell you that a lot of enemies drop missile refills upon defeat, so go ahead and blow those critters to smithereens. It'll make your trek much easier until you can equip yourself with the Hi Jump Boots, Varia Suit, Screw Attack, and Wave Beam. Then you'll be tearing through aliens... excuse me, extraterrestrials, in no time.

So if you can accurately chart your progress and survive the frustration of getting knocked around repeatedly by pipe bugs and hopping monsters, Metroid is a pretty fun game. But I highly recommend the upgraded version Zero Mission because it solves the problem of repeating corridors by cutting down on them and offering more variety, and low and behold, comes with an automatic map feature that keeps track of where you've been and where you're going if you download data from key rooms within each region of Zebes. It also adds a few new weapons, another part of the planet to explore, a more advanced plot, and a surprise after you complete the original game's objective.

Now I just need to buy a Wii and download Kid Icarus. That's another classic I had very little playtime with that I would like to tackle. Fun note: Metroid and Kid Icarus were created with the same game engine, as evidenced by the password feature.

And that's just the way it is.

Bonus: Here's the map I created to help me through the game. No wonder I got lost. 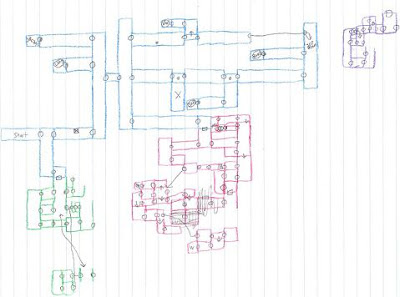