From Good To Bad To Sort Of Okay 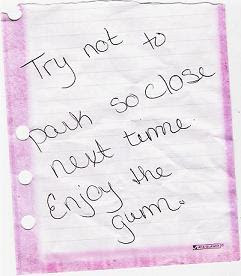 This note was awaiting me on the hood of my car as I left the Warwick Mall tonight. My guess is that it was left there by the needlessly wide truck that I parked next to in the lot. I fit perfectly between it and the car that was on my other side. Yes, I was parked close to the truck, but considering the size of it, a compact would have difficulty giving it enough space. I was able to easily get out of my car. While I was gone, the owner of the truck, a great motorist who took it upon himself to rid the world of this injustice, apparently realized at least one of the problems evident in owning such a big vehicle and decided to take it out on the person situated between the parking lines next to him.

So when I returned to my car, and entered it, I noticed the little note stuck in the windshield wiper. "Great," I thought, "another stupid flyer about some great weight-watching plan". So I got out, read it, and got a little peeved. I looked all over my car for any signs of vandalism, but didn't see any. I sure didn't want to drive off knowing that there was gum stuck somewhere that might cause a problem. I'm not much of a motor-vehicle aficionado, so I can't say whether or not a little piece of gum could be stuck somewhere to "gum" up the inner workings and cause me to barrel roll into a ditch somewhere. So I fetched someone from mall security to give my car a look over. He shined his little flashlight on the underside of my handle and immediately found the offending chewy mess. Apparently, he stuck it as far up the car handle as possible. And I, like most people, use the tips of my fingers to pull the handle, rather than shove my entire hand in it and yank it open. He screwed up a fuckin' gum prank! How stupid do you have to be? It's a good thing he left the note or I never would have known. I most certainly not get to "enjoy the gum!" I was cheated! Even mall security confirmed I was parked perfectly within the lines. He stated there were some very sick people out there, and I tend to agree. Here's a little note to you drivers of grossly-proportioned vehicles out there. If you try to park in a normal spot, everyone will park "a little close" to you if they're within the boundaries of their own spot. You are not entitled to have the spots to your left and right vacated so you can swing your door wide open, stretch your legs, scratch your crotch and grunt. Blah blah blah, drivers of big vehicles are compensating for something, blah, blah blah. I drive a Honda Civic, which I guess can be deemed complimentary towards my manhood. The best part of all this is, while I've beaten lesser men using nothing but my intellect before, this is the first time I defeated someone without even being present. If that lunatic is the kind of person who has to get revenge on someone who's in the right, what will he do to someone who "inconveniences" him worse? I think heavy fines and jail time is in someone's future. Now that I look at the note more, the hand-writing distinctly female, based on what I’ve seen from girls. Especially because the fact the period at the end is a circle. Could it be this sadist was a woman? At least I could have sweet-talked my way out of this one! On second thought, maybe the ineffective gum treatment was safer.

I don't want to leave you all with a sour impression of mankind, so I'll relay the cool thing I checked out today prior to my inadvertent victory over idiocy. I didn't visit the mall tonight to shop at The Hot Topic or (blech) Old Navy. As I currently work in the electronics department of a retail store with a video game selection, I get visited by representatives from Nintendo. Great guys who know and appreciate the product, just like me. Anyway, they invited me to check out the neighboring mall at 6 'o clock. They told me it was a sponsored event where they would show off the Nintendo DS Lite, such as new models and games. Being the fan boy for the Big N I am, I was only too happy to take them up on their offer. I saw both of them there, as well as employees from Electronics Boutique at both this mall and the one I work at (for the record, the two malls are within five minutes of each other). There was a big deal about people being able to bring in their DS and their copy of Nintendogs to get an exclusive pair of sunglasses for their digital pooch to wear, promoted as the special glasses that Haylie Duff's (Hillary's sister) dog has. There were a bunch of bean bag chairs where the kids could huddle together with their game-nines to get the bonus shades. See what I did back there? I combined the words "game" with "canines" to make a completely new word for the English language. I'm a professional writer. I assure you I'm allowed to do this. If you weren't into the Nintendogs thing, which is one of the system's highest sellers, they also had a station available for you to wirelessly download demos of DS titles of the present and future. While they had three DS Lites set up for visitors, I was well prepared by bringing my own DS to the festivities, so I was able to download and try out numerous games at my leisure. There were about 20 games and short movies to experience, but I only tried my hand at the few I was interested in. The games I tested are as follows:

Metroid Prime Hunters: Not a big fan of first person shooters, but I did get very far in Gamecube's Metroid Prime. I was hesitant to buy this, and today I found out with good reason. The controls are difficult, as it feels as if you need three hands to play. One hand to move your character, the other to jump and shoot, and another to control your viewpoint. I'm not one of those "purists" who believe game franchises like Mario and Sonic don't belong in 3-D, but I can't say I support Samus' switch to FPS. I'd love to give her a try in third-person. I'm also huge fan of her 2-D outings, including her recent adventures on Game Boy Advance.
Meteos: I read the instructions and still don't get it. The controls are just bizarre.
Mario vs. Donkey Kong 2: I was keeping an eye on this upcoming release, and managed to demo it here. However, the experience kind of turned me off, as controlling the Mini-Marios with the stylus doesn't seem natural. Those little wind-up toys move kind of on their own. Hmm... perhaps the controls are dead on, then.
Clubhouse Games- Darts: Clubhouse Games will feature many parlor games in its cartridge, and you could sample Darts here. Just touch the dart on the touch screen and push it forward to the dartboard on the top screen. I can't even begin to figure out why we're supposed to be entertained by this.
Magnetica: I saved the best for last, and boy did I enjoy this one. It's kind of hard to describe, but it's a puzzle game where you use your stylus to fling marbles at an ever-growing "snake" of marbles spiraling towards the center of the screen where your own marble launcher is situated. If your marble connects with two or more of the same color, they disappear, and when the gap you made closes, it could potentially make a chain of other similarly colored marbles vanish as well. As this was my favorite, I kept it loaded in my DS when I left. Just a note, all demos disappear after you turn the unit off, but closing the DS itself enters it into hibernation to save on power. Plus, I have it plugged into the charger. I may very well purchase this one.
Don't accuse me of being a DS hater because I didn't like a majority of those games. My library consists of 19 titles to date, with many more I'm looking forward to. I guess these just weren't "there" for me. But it's not a complete loss. Besides a demo of Magnetica, my man Johnathan hooked me up with a free DS shirt.
Check me out, I'm a corporate shill! An extra-large one! Wiiiiiiiiiii!